United States: Northern District Of Illinois Eastern Division Grants In Part Drugstore Chain’s Motion For Summary Judgment In Connection With Securities Class Action Lawsuit 11 November 2021 Shearman & Sterling LLP To print this article, all you need is to be registered or […]


To print this article, all you need is to be registered or login on Mondaq.com.

On November 2, 2021, Judge Sharon Johnson Coleman of the
Northern District of Illinois Eastern Division granted in part
defendants’ motion for summary judgment and denied
plaintiff’s partial motion for summary judgment in a
securities class action asserting claims under Sections 10(b) and
20(a) of the Securities Exchange Act of 1934 (the “Exchange
Act”) against a retail drugstore chain (the
“Company”) and two of its former senior
executives.  Washtenaw County Employees’ Retirement
System v. Walgreen Co. et al., No. 15-cv-03187 (N.D. Ill. Nov.
2, 2021).  Plaintiff alleged defendants made materially false
and misleading statements concerning the Company’s earnings
before interest and taxes (“EBIT”) projections and its
ability to meet it.  The Court granted in part
defendants’ motion for summary judgment, holding that one of
the alleged misstatements was a non-actionable forward-looking
statement under the Private Securities Litigation Reform
Act’s (“PSLRA”) safe harbor, that defendants
proved the truth of certain alleged misstatements, but that triable
issues of material fact remained with respect to a number of other
alleged misstatements.  The Court denied plaintiff’s
motion for partial summary judgment regarding one of the individual
defendant’s intent to deceive, holding that there was a
genuine issue of material fact as to the falsity of that
defendant’s statements and is therefore a question for the
jury.

According to the complaint, a substantial component of the
Company’s business involved sales of generic drugs.  The
profit margin of these sales depended on the difference between the
cost of the generic drug and the reimbursement by various third
parties, such as insurance companies.  For a number of years
prior to the alleged misstatements, generic drugs had allegedly
followed a deflationary trend and the Company, in an effort
to protect its margins and on the assumption that generic drug
prices would continue to decline, allegedly contracted with third
parties to set a maximum rate of reimbursement for the generic
drugs it sold.  The Company also announced in 2012 that it was
entering into a two-step merger with another retail drugstore
chain, in which the Company acquired 45% of the target
company’s stock and gave the Company the option to acquire
the remaining 55% approximately three years later if the
Company’s shareholders approved.  Against this backdrop,
the Company allegedly set forth long-range goals for FY16, which
reflected the expected benefits of the new partnership with the
target, including generating $1 billion in combined synergies and
between $9.0 – $9.5 billion in EBIT.

According to plaintiff, the deflationary trend in generic drug
prices that precipitated the merger and the Company’s
announcement of its long-range financial goals for fiscal year 2016
began to shift in 2013.  Plaintiff alleged that the
Company’s executive officers misrepresented the extent of the
impact this shift had on the Company’s ability to meet its
fiscal year 2016 EBIT target of $9-9.5 billion.  Specifically,
plaintiff alleged that defendants made the following
misstatements:  (i) statements made by one of the individual
defendants during a March 25, 2014 second quarter earnings call
that the Company remained focused on delivering the EBIT target;
(ii) a statement by one of the individual defendants in March 2014
that “the most significant factor affecting the pharmacy
margin was dramatically slower rate of new generic introductions
year over year;” (iii) the Company’s similar statements
in a March 2014 Q2 10-Q filing; (iv) statements by one of the
individual defendants at an April 17, 2014 investor conference
about generic drug price inflation and its impact along with
reimbursement pressures by third-party payers; (v) statements by
one of the individual defendants between May 14-15, 2014 that
Company management believed the EBIT target was achievable; and
(vi) a statement made by the individual defendants during a May 16,
2014 conference call that the Company had not seen unusual trends
in generic drug price inflation.

The Court first turned to defendants’ motion for summary
judgment on loss causation grounds.  The Court summarized that
the parties’ loss causation arguments focused on
plaintiff’s loss causation expert’s opinion that the
corrective disclosure at issue was made on August 6, 2014.
Defendants, on the other hand, contended that the corrective
disclosure occurred during a June 2014 earnings call when the
Company withdrew its projection for fiscal year 2016’s EBIT,
stating that the “goal was not attainable and that generic
inflation and reimbursement pressures significantly affected the
goal.”  According to defendants, “under an
efficient market theory, this earlier disclosed information was
already incorporated into the share price before the August 6
disclosures” that plaintiff argued constituted the corrective
disclosure.  Plaintiff contended that  the August 6
disclosures acted as the corrective disclosure, because it was the
first time the Company revised its fiscal year 2016 EBIT goal,
which the Company decreased from $9-$9.5 billion to $7.2
billion—a $1.8 billion drop from its prior goal.  The
Court held that there was a “triable issue of fact of whether
the August 6 disclosure revealed new information concerning the
extent and seriousness of Walgreens missing its FY16 EBIT
goal.”  The Court further observed that
defendants’ argument for the earlier corrective disclosure
date “does not take into account that the relevant truths can
leak out over time through a series of partial disclosures”
and “does not acknowledge that the market may not have
realized the significance of [the Company] missing the FY16 EBIT
target until the actual shortfall” was announced in
August.  Accordingly, the Court denied defendants’
motion for summary judgment in relation to loss causation and
observed that the parties’ criticism of the designated loss
causation experts and their reports “are best left” for
the upcoming Daubert motions.

Turning next to defendants’ alleged misstatements, the
Court granted defendants’ motion for summary judgment with
respect to (i) the alleged March 25, 2014 statement that the
Company remained focused on delivering the EBIT target despite
progress not meeting expectations thus far, (ii) the alleged March
25, 2014 statements on the earnings call asserting that “the
most significant factor affecting the pharmacy margin was [the]
dramatically slower rate of new generic introductions year over
year” and similar commentary in the Company’s SEC
filing, and (iii) the alleged statements made at the April 17, 2014
investor conference that the Company has always experienced a
degree of reimbursement pressure.  Specifically:


The Court next turned to three alleged misstatements that it
found presented a genuine issue of material fact and therefore were
not subject to adjudication at summary judgment.
Specifically:


Having found that plaintiff raised triable issues of fact with
respect to certain of the foregoing statements, the Court granted
in part and denied in part defendants’ motion for summary
judgment, and the Court denied plaintiff’s motion for partial
summary judgment, holding that defendants raised a genuine issue of
material fact precluding a finding of scienter as a matter of
law.  The Court concluded its opinion by
“remind[ing]” the parties and citing opinions of the
Seventh Circuit holding that arguments made for the first time in
reply and “cursory arguments made in footnotes” are
waived, especially where parties were permitted to file oversized
briefs.

The content of this article is intended to provide a general
guide to the subject matter. Specialist advice should be sought
about your specific circumstances.

Should You Tell Your Doctor That You're a Doctor?

Thu Nov 11 , 2021
Ought to health professionals trying to find health care disclose that they are a physician?  The concern drew spirited discussion when urologist Ashley Wintertime, MD, designed a very simple, clear-cut request on Twitter: “If you are a health practitioner & you come to an appointment remember to tell me you […] 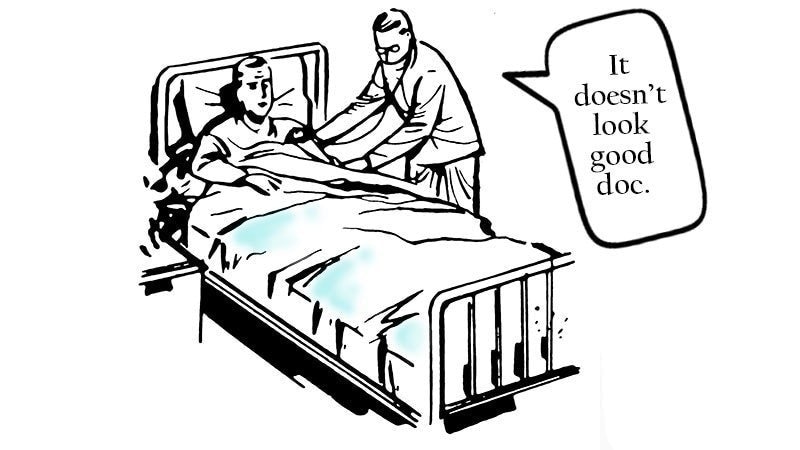